Salt: The Keystone to Your Kitchen

Sodium reduction has lately become a culinary cause célèbre. With the public’s health in mind, foodservice operations have taken drastic steps to cut out the salt, hoping to improve the health of their patrons. Unfortunately, many companies have found that they have needed to slide the salt back into their menus, lest their sales continue to slip away. With science only backing half of the dangerous claims, there’s a definite argument for keeping salt as the keystone to your kitchen.

Salt has long since added to the flavor profile of our dishes. In fact, salt’s ability to preserve meats was one of the keystones to the foundation of civilization. Now, salt is used to enhance meals and brine meats, and it is added to virtually every dish in America. With the increase in salt usage in our foods, there has also been a corresponding (but maybe not correlated) increase in those suffering from hypertension. Many believe that there’s more to this connection than simple circumstance.

Unlike tobacco, alcohol and other long-corroborated health risks, sodium remains a topic of sometimes angry debate among researchers. There is no evidence that average people — those without hypertension — need less sodium, critics say, and too little of the essential nutrient could be as dangerous as too much.

“The science does not support an effort to reduce sodium in people who eat around three and a half grams of sodium a day, and that’s most Americans,” said Michael H. Alderman, editor of the American Journal of Hypertension. “Yet here we are doing silly things that are P.R. Salt shakers only account for about 10 percent of your salt intake. I don’t think it’s ethically justified.”

Many restaurants have responded to the anti-salt hype by removing salt shakers. They either believe their dishes are perfectly seasoned when they leave the kitchen, or they believe that it would discourage patrons from using salt. In the United States, though, there appears to be little appetite for removing salt shakers from restaurant tables. “We don’t think that would be a positive guest experience,” said Cheryl Dolven, director of health for Darden Restaurants, the parent company of Olive Garden, Red Lobster and other restaurants.

Thus, utilizing salt correctly in the kitchen is the key to creating dishes that satisfy guests while perhaps discouraging those guests from over-using their salt shaker. Salt can be used to enhance soups, add flavor to burgers, and texturize breads. Ensure that you aren’t relying too heavily on it’s flavor profile, though, as customers are more attuned to the overuse of salt in restaurants in general. It is clear that back-of-house preparation, cooking, and storing equipment is crucial to keep a restaurant up and running smoothly. Similarly, front-of-house serving equipment is equally as important to run a successful restaurant. Commercial serving equipment includes pieces such as serving spoons, serving trays, and serving bowls, each consisting of a variety of sizes, shapes, materials, and purposes. 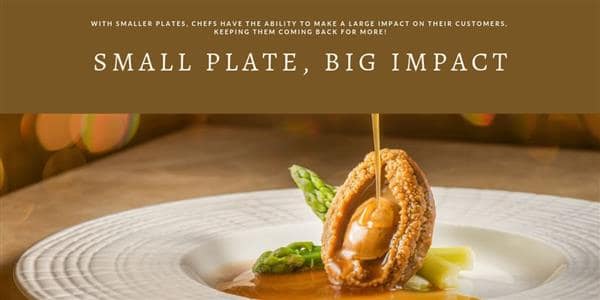 Traditionally, appetizers are designed as a shared item while entrees are made for the individual. With smaller plates, chefs have the ability to make a large impact on their customers, keeping them coming back for more!

While the large units in your kitchen are typically focal points that get a lot of TLC, it’s the smaller pieces of commercial equipment that can sometimes get left on the back-burner when it comes to maintenance and cleaning.