Summertime weather means pit beef and barbecue to boot! Similar to grilling, what separates barbecue is the slow cooking time at low temperatures to get that perfect BBQ taste. But with territorial claims to what makes the best BBQ, it boils down to a smoky flavor from low and slow cooking methods. Serving BBQ in your restaurant will bring nostalgic customers in for a summer favorite.

In the late 1800s, barbecue methods in Texas typically involved a whole hog or steer. Then, as BBQ made its way from a hole in the ground to the restaurant kitchen, the process had to be sped up. Northerners will now boast that their BBQ is cooked in a ‘New York Minute’, but the real succulent variety is cooked in the old-fashioned Dixie method: low and slow. For restaurants looking for that authentic flavor, this may mean starting your BBQ prep the night before and allowing meats to gently cook overnight and into the next day.

Barbecuing encompasses four or five distinct types of cooking techniques. The original technique is cooking using smoke at lower temperatures (usually around 240–280 °F or 115–145 °C) and significantly longer cooking times (several hours), known as smoking. Another technique is baking, utilizing convection to cook meats and starches with moderate temperatures for an average cooking time (about an hour plus a few extra minutes). Yet another technique is braising, which combines direct dry heat charbroiling on a ribbed surface with a broth-filled pot for moist heat, cooking at various speeds throughout the duration (starting fast, slowing down, then speeding up again, lasting for a few hours). By contrast, grilling is done over direct dry heat, usually over a hot fire (i.e., over 500 °F (260 °C)) for a short time (minutes). Grilling may be done over wood, charcoal, gas (natural gas or propane), or electricity.

Because of the longer cooking times, lesser cuts of meats tend to work well in this cooking method. With the right blends of spices and sauces combined with barbecue cooking, there’s a wide range of possibilities for that perfect BBQ result.

Once you’ve perfected your barbecue meats, then it’s up to your creativity to put together the full  meal. Typical sides include collard greens, baked beans, cornbread, and slaw, but many restaurants are trying their hand at fancier options like bacon macaroni and cheese or even spicing up their BBQ sauce lineup with interesting flavor profiles. Whatever matches you restaurant’s theme and brings an edge of interesting creativity to your barbecue selection is what will keep customers coming back for more!

Commercial Grills
How To Open a Barbecue Restaurant 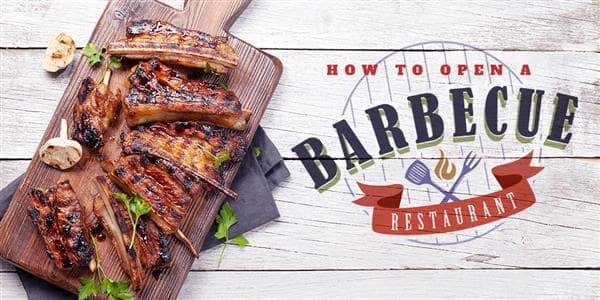 As with any business, starting a BBQ business can be a risky endeavor. But if dedication, preparedness, and hard work are the meat, having a clear vision and goal is the secret sauce.