Commercial Steamers Are A Great Piece To Add To Your Restaurant

Because it is so healthy, steaming is a popular way to cook many things and will be a hit with your customers as well. Vegetables take well to steaming, as the steam results in much of the moisture being absorbed into the food and most of the flavor remaining. Steamed vegetables can be a great side dish or healthy alternative to vegetables in main dishes that are prepared differently.

While it may be uncommon to steam meats in America, steaming is a popular way to prepare certain seafood, such as clams.

Lobster, crabs and other shellfish take well to being steamed, as the flavor is contained within the shell, the steam simply cooks the meat without the possibility of breaking shells because of rough handling.

Whole fish are commonly steamed in many Asian cuisines. Make a lemon dill sauce and spread it over and underneath the fish. Steam until done to have a healthy and tasty fish entree. Many soy-based sauces can be effectively steamed as well, since the steam does the cooking, it prevents the sauce from boiling away and leaving you with an over-salted mess.

If you're looking for a new kind of restaurant equipment to take your business to the next level, then look no further than the healthy and efficient commercial steamer.

Cooking Equipment
Buying Guide: How to Choose A Steamer for Your Foodservice Establishment 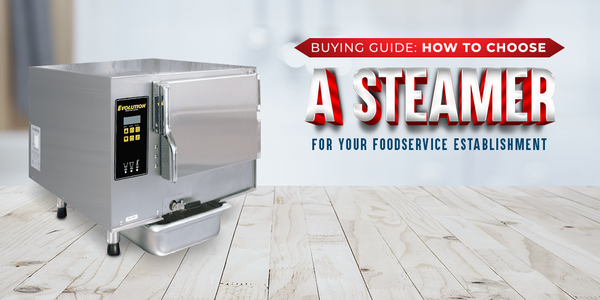 A breakdown of the most common steam cooking equipment and how you can build a strong lineup that is tailored to your operation.