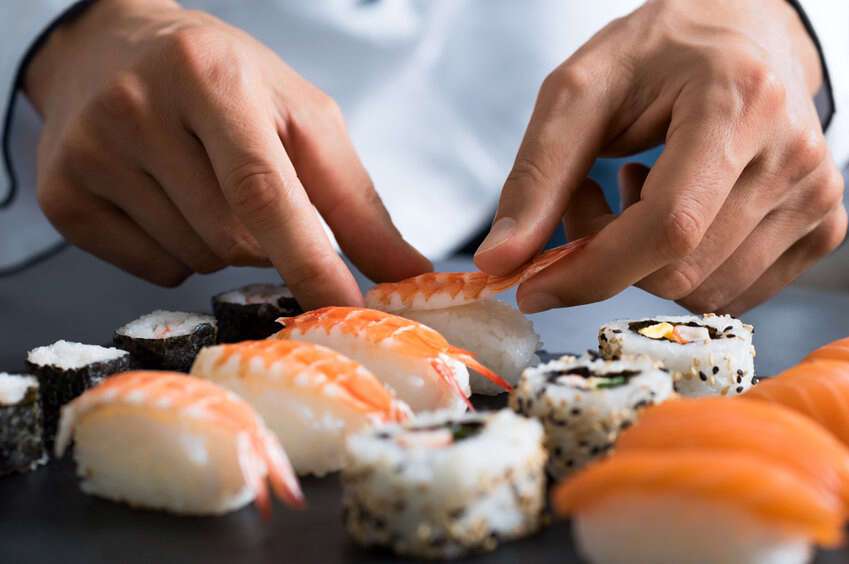 Sashimi is sliced raw meat-salmon or tuna. Sashimi means ‘pierced flesh’ in Japanese. Sushi is ‘sour rice’, or vinegared rice, that is blended with various ingredients like fish, veggies, or meat. Sashimi always contains seafood or meat, but sushi can be made with or without meat. Sashimi is always served raw. Some popular types of sashimi are tuna, salmon, sea bream, yellowtail, squid, shrimp, scallops, red meat, clams, and mackerel. Some popular sushi types are nigiri, gunkan, temaki, and norimaki.

Nigiri Vs. Sushi Vs. Sashimi

Sushi is primarily vinegared rice served with various ingredients, including fish. Sashimi is thin slices of raw meat, fish, or vegetables. Sashimi dishes contain high amounts of protein and low carbs. At the same time, sushi has high carbs and calories because of rice. Additionally,  you can serve sushi without fish or meat.

Nigiri is a blend of sashimi and sushi. A raw slice of fish (sashimi) in nigiri is served over vinegared rice (sushi). Nigiri is mostly served on wooden trays with wasabi, soy sauce, and ginger.

What is Sushi Made Of?

Sushi is essentially vinegar-soaked rice. Traditional sushi contains seafood, and contemporary sushi is made from meat, veggies, seafood, and additional ingredients like avocados and cucumbers. Sushi also contains seaweed as an ingredient.

Sushi is mostly made from raw seafood. Raw seafood can contain various bacteria, viruses, and parasites which can lead to foodborne illnesses. Sushi can be safe to consume if it has been stored immaculately. There are some precautions that you need to follow before consuming or serving sushi:

There are five primary types of sushi:

Contemporary sushi was created in Japan at the beginning of the 19th century by Hanaya Yohei. The actual origin of traditional sushi can be traced back to both China and Japan. Sushi is said to have originated in the paddy fields of southern China or Japan. Narezushi is a dish that is made from lacto-fermented fish, salt, and rice to control putrefaction. According to historians, narezushi was created in Japan during the Yayoi period or the Neolithic age.

What is Sushi Wrapped in?

Sushi is mostly made with raw fish and meat wrapped in rice and seaweed.

You can also get various sushis without raw fish or meat like the cucumber roll. In Japan, a cucumber roll or kappamaki contains nori/seaweed, cucumber, and sushi rice. Cucumber rolls are perfect for vegetarians and health-conscious people looking for a non-meat sushi roll. Additionally, you can add avocado slices to make it even healthier.

Farmed Atlantic or Alaskan salmon is ideal for sushi. Avoid wild salmon as it can contain various parasites. Choose farm-raised salmon that is categorized as sushi-grade and stored in specific temperatures.

Sushi is not considered seafood. Sushi‘s main ingredients are rice moistened with vinegar. Sushi originated centuries ago as a method to preserve raw fish. Raw fish was cleaned and stored in layers of rice and salt. In the Muromachi period, vinegar was introduced to quicken the process of fermentation. Once the fish is fermented, the rice is discarded to obtain the fermented fish. 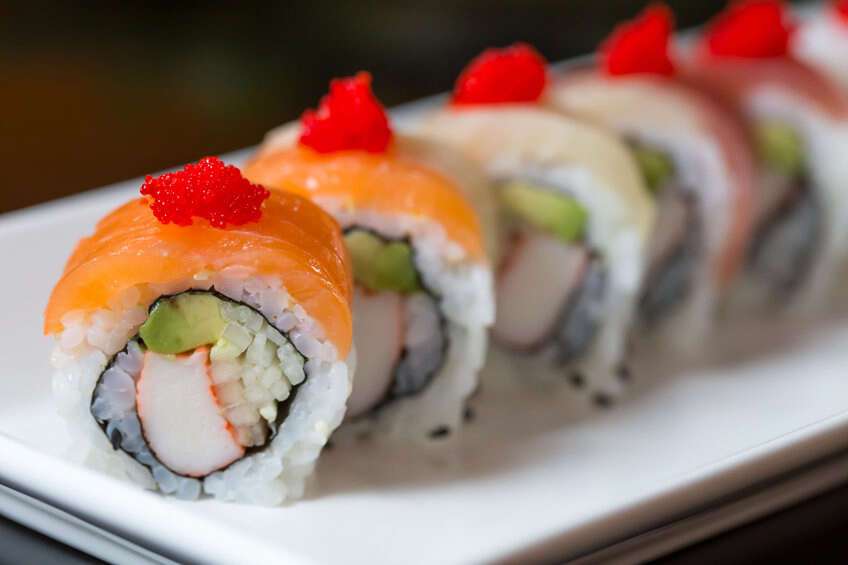 How Many Pieces of Sushi are in a Roll?

Maki is mainly cut-rolled sushi made with veggies, fish, and rice on a bamboo mat. A typical sushi roll or maki is cut into 6 to 8 bite-sized pieces for effortless consumption.

Sashimi is primarily thin slices of raw ingredients. You can use meat, fish, and veggies as sashimi. For sashimi, saltwater fish is preferred over freshwater fish as it contains fewer parasites. Sashimi is mostly served with daikon, which is a substitute for rice.  Sashimi originated in the Heian period, where ‘namasu’, a type of vinegar, was used to season raw fish and vegetables. The word ‘sashimi’ in Japanese means ‘cut body’. Sashimi is mostly eaten with beer or sake.

There are various types of sashimis available in the market:

How to Cut Salmon Sashimi

Cutting salmon and seafood is an art. You can choose to use any of the following methods to cut salmon sashimi:

Hira-zukuri: Hira-zukuri is the main method of slicing sashimi. You can use this style to slice tuna and salmon. You need to angle the knife to your left and pull the knife towards you in this method.

Kaku-zukuri: In this method, you slice fish into thin pieces with the tip of a sharp knife.

Sogi Zukuri: With this method, you can achieve perfectly cut thin slices of salmon. In this method, you position the knife and tilt it at a 45-degree angle and move the blade through the salmon meat.

Maki, or makizushi, is rolled sushi rice. Rice is mainly rolled in dry seaweed. Maki can also be wrapped in an omelet, cucumber, and soy paper.

Nigiri is raw seafood served over vinegar rice. The origin of nigiri can be traced back to Hanaya Yohei from Ryogoku, Japan, in the 1820s. Hanaya owned a sushi stall near the banks of the Sumida river to preserve the freshness of fish. Nigiri is mostly served with vinegar rice. You can also eat nigiri with soy sauce and wasabi.

The primary difference between temaki and maki is the shape. Maki is sliced into 6 to 8 pieces and eaten with chopsticks. Maki is rolled using a sushi mat, and the ingredients are circled with a large sheet of nori. Temaki is cone-shaped sushi that is rolled by hands using nori. Temaki is eaten by hand.

Nigiri is mostly slices of fish served on top of vinegar rice. At the same time, maki is a roll that contains layers of veggies, fish, seaweed, and rice.

Sushi roll or maki roll has a cylindrical structure and is sliced into 6 to 8 small portions. A maki roll is made from fish, veggies, and various ingredients like seaweed and vinegared rice. Hand roll sushi is mostly cone-shaped and resembles an ice cream cone. The primary ingredient in a hand roll is rice. Hand rolls are also known as temaki rolls. The cone is made of seaweed, and it contains seafood, veggies, rice, and various ingredients.

Yellowtail, also known as Hamachi, has a strong and superior flavor to white tuna. Sushi made from white tuna or Albacore is one of the finest white fish sushi in the world. White tuna has a smooth texture and distinct flavor. 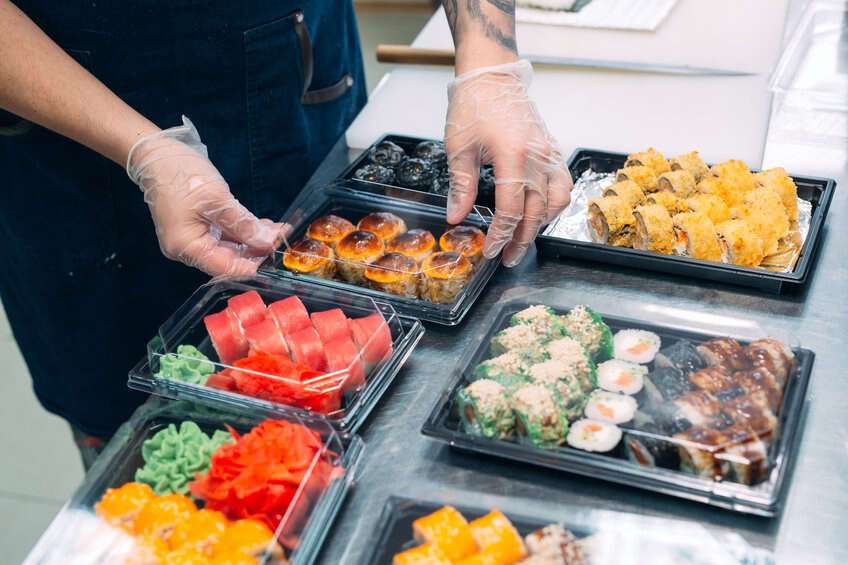 Sushi and sashimi, the best representations of Japanese cuisine, have taken the world by storm. Sushi and sashimi have inspired many contemporary dishes. They can be enjoyed in their meat, fish, and vegetarian (in the case of sushi) forms. Lean meat sashimis are also healthier than other meat-based dishes. Seafood sashimis contain omega-3 fatty acids ideal for neurological development and general well-being. Sushi and sashimi are mostly accompanied by sake. The sweet taste of sake makes sushi and sashimi livelier for a well-rounded meal. 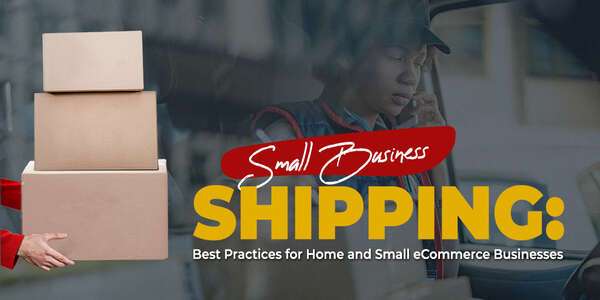 How do you ship goods to your customers? With an effective small business shipping plan, you can ship your products efficiently at affordable rates.

Read More
A Beginner’s Guide to Commercial Kitchen Cost: How Much Does it Cost to Buy Restaurant Equipment? 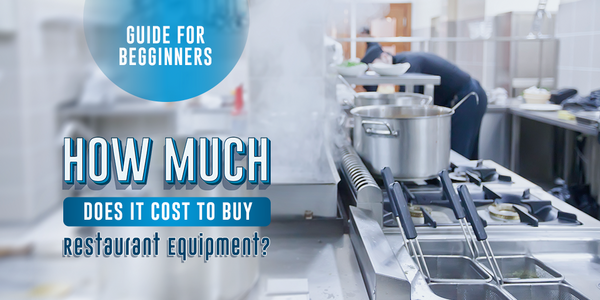 Opening a restaurant isn't cheap. Learn what's the average cost of commercial kitchen equipment, how to choose the right restaurant equipment for your business & more.

Read More
Restaurant Equipment Leasing vs. Buying: Which Is the Better Option? 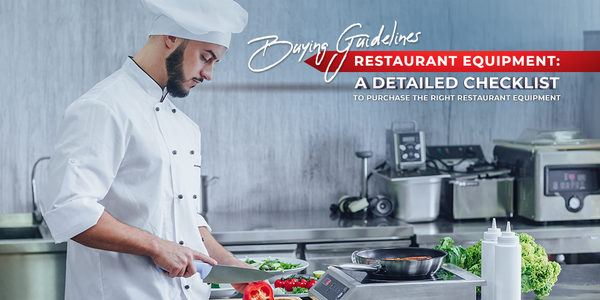 Obtaining the proper commercial kitchen equipment is one of the most important aspects of a new restaurant. Here's a checklist of equipment you'll need when opening a restaurant.