Understanding the Differences Between Food Processors vs. Blenders

What is a Food Processor? 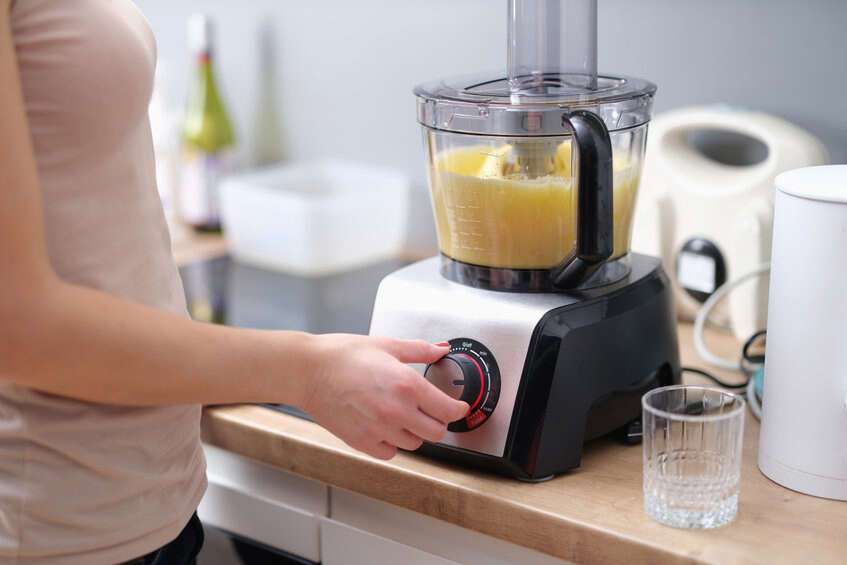 Often made of hard plastic and sometimes a hybrid material, food processors come with a variety of jars and attachments. The various discs and blades are used for different functions. Jars of food processors are wide and allow for steady incorporation of the food material as the machine functions. Lids of food processors come with a feed chute that allows you to drop in the food material incrementally. You can then manage the material placed in the chute while the blade does the chopping. Their wide base makes them particularly adept at handling dry ingredients as opposed to wet components, in case you were wondering whether you should use a blender or food processor for such material. The partially wet or emulsified material can get stuck on the sides of the jars and often remain out of reach for the wide-set blade as there’s no vortex effect in play, unlike the narrow and fast-spinning blender blade. Since food processors have large blades, they function effectively even if you fill them right up to the brim of the jar, unlike blenders that don’t function as effectively with full jars - an important food processor vs. blender difference. The removable blades of food processors also make them easy to maintain and clean.

All attachments of the food processor are attached to a drive pin at the bottom. The drive pin allows the disc insert to sit on it stably, while the blades are balanced higher up in the jar, allowing the rest of the space to be used for the processed food. One of the biggest advantages of food processors is that you’re free to add ingredients to the mix even while the machine is in operation - a key difference between a high-speed blender vs. a food processor.

What is a Blender?

Similar to the food processor, the blender houses a powerful motor in its plastic or hybrid body, with the speed and power controls at its base. The food processor vs. blender difference is marked by the primary function of the blender, which is to emulsify foods by either combining liquids, solids & liquids, or semi-solids & liquids to create a homogenous mixture. Blender jars are conical in shape, being narrower at the bottom to enable the creation of a vortex that helps the system incorporate the ingredients better and feed them to the blades that can break them down. The blade often sits at the bottom of the pitcher and can be removed to facilitate proper cleaning of the unit. The blade often has points that are placed at different angles, making the process of blending thorough. Whether it’s crushing ice, cutting up fruits & nuts, or just mixing two liquids that do not usually combine, the blender can get it done with ease. The homogeneity of the mixture is an important factor that sets the standard for the difference between a high-speed blender and a food processor.

The lid, lined with a gasket, fits perfectly over the top of the pitcher, creating an air-tight seal to prevent leaking and spillage during the blending process. Blenders are the go-to appliance for smoothies, fruit juices, soups, and even certain varieties of sauces and whipped cream. An important difference between the blender vs. food processor is the lack of different blades. Most varieties come with just one type of blade or a couple of extras. This limits the functionality of the blender to predominantly liquid-based food processing, whereas the food processor is far more eclectic in its range of functions in the restaurant. There also exist varieties of blender models that can be deployed based on the utility of these devices. Hand blenders or immersion blenders are portable, and contain a small set of blades at the bottom of the stalk of the device, allowing you to blend in any container you have. These devices can be used in a variety of utensils to liquefy foods, as opposed to the exclusive jar-based setup of devices like food processors - an essential distinction between a hand blender vs. a food processor. Conversely, personal blenders are more compact and also portable, allowing the user to fix a blade at the bottom of a compact jar/ pitcher and allowing them to drink the final product straight out of the pitcher due to the manageable size of the appliance.

The Core Difference Between Food Processors vs. Blenders Food Processor vs. Blender: When to Use Them in the Kitchen

Now that you have an understanding of the differences between food processors vs. blenders in their functions, utility, and in the basic principles that govern them, it’s important to know when to use these machines in the kitchen. Food processor vs. blender differences, while plenty, can still confuse some business owners, often leading to questions such as “Can you use a blender instead of a food processor?”. Understanding what works best for each task will also help you purchase the right equipment for your establishment. While coffee shops and juice bars will benefit from having a highly-rated blender, full-service restaurants will do well to own a competent and reliable food processor for their versatile requirements in the food preparation area. Here’s a table to help you identify the areas where food processors and blenders perform better over the others.

The above table illustrates the utilities of the food processor vs. blender. Applying this information in the kitchen can enable you and your workers to make informed decisions about both types of equipment and put them to use. Ensure you invest in high-quality equipment to make the best of your investment in commercial kitchen tools for your establishment.