Pasta recipe with garlic butter shrimps is an excellent idea for healthy and filling lunch or dinner. The favorite dish of Italian cuisine can be cooked in countless ways. Today we will focus on one of them - pasta with shrimps according to the Ckitchen’s unique recipe.

The best delivery services ensure that foods are delivered to doorsteps just as fresh as the moment they were taken out of the oven. While transporting bins and other units designed at keeping foods regulated at certain temperatures have been a lifesaver for many, Domino’s Pizza is taking it a step further by incorporating warming ovens in their delivery vehicles.

Here are just a few categories containing delicious menu items that can be found in restaurants, on and around Thanksgiving Day.

Watching trends in foodservice is key to staying ahead of the game. In fact, we blog weekly about different ways to freshen your menu to keep up-to-date with the latest trends! A group of patrons who are having a big hand shaping the foodservice industry are college-aged millennials. With around 52 million millennials accounting for 13 billion visits and $73 billion dollars in foodservice establishments in 2010, it pays to take their heed and spend the effort and time in investing in their preferences.

Did You Know? EverPure Water Filtration

Many restaurant owners invest large amounts of time, money, and effort in finding the perfect commercial-grade kitchen equipment for their restaurant, but those efforts may be in vain. When it comes to beverage dispensers and ice machines, the water used to create ice and add to beverages must reflect the same quality that you purchased in the design of your equipment. In fact, it’s almost essential for you to invest in a water filtration system to cleanse the incoming water lines to your restaurant - specifically, to your beverage and ice machines. EverPure water filtration systems are the perfect solution to filtering the incoming water to your units, leaving a clean, fresh input for your ice makers and beverage dispensers.

The Essential Equipment For Your Commercial Kitchen in 2021

When opening a restaurant, you are not only opening a business, you are also creating a unique space where you can give your patrons a great experience. You need fantastic service, exciting food, state of the art design, but most importantly you have the responsibility of providing a safe environment for your diners with regards to food safety and cross contamination.

Here are some things to keep in mind if you’re considering opening one of these espresso-sized coffeehouses.

Jamie Oliver: Restauranteur, Celebrity Chef, and So Much More

Who is this Jamie Oliver we’ve all heard so much about? Let’s take a closer look.

Born James Trevor Oliver, Jamie Oliver is one of the era’s most famous individuals in the areas of food-focused television shows, cookbooks, and movements. Oliver began his journey as a pastry chef almost two decades ago and is now a world-renowned restaurateur, celebrity chef, and media personality. Most recently, Oliver is known for his global campaign for better food education.

4 Ways Restaurants Try to Get You to Spend More Money

Asking questions like, “Do you want fries with your meal?” or “Would you like to supersize that?” are not the only ways for foodservice establishments to increase sales. Believe it or not, you may have been subjected to sales pitches like these, or other sneaky upselling techniques, without even knowing it. The truth is, the tactics that restaurants use to try and get you to spend some extra money are much subtler than you may realize. Here are a few of them to be aware of from now on. 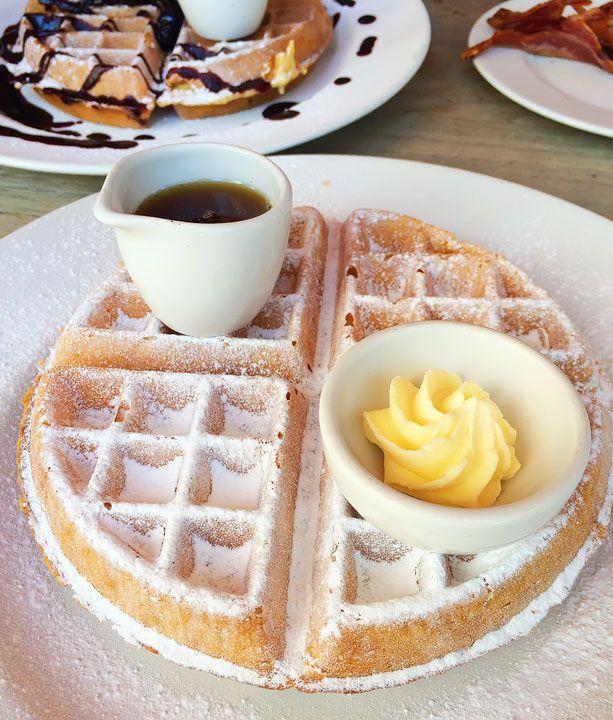 The Many Uses of a Braising Pan with Recipes

Another plus is that cuts of meat you would otherwise avoid and which typically cost less because they are harder to work with, can in fact be made into delicious meals through the braising method in a proper braising pan.

In our ‘Product Focus’ blog series, we’ll discuss many of the industry leaders in commercial kitchen equipment, highlighting what sets them apart from the rest! In this post, we’ll delve a little deeper into one of the leaders in cooking equipment: Vulcan.

Food Rethermalizing is one of the least known pieces of food equipment for consumers. Even people who consider themselves foodies may not be aware of how prevant food rethermalization in popular chain restaurants in the US.

What better breakfast is there than a hot waffle smothered in butter and maple syrup? Or a brunch with a fluffy Belgian waffle covered in whipped cream and strawberries? Or even a delicious dinner of chicken and waffles? Well, none of these would be possible without the help of a waffle maker.

If you plan to have a set selection or set quantity of soups daily, invest in heat and hold warmer for each soup. Turn them on first thing in the morning and have yourself ready for the rest of the day.

4 Tips for Ordering Wine at a Restaurant Without Looking Foolish

Have you ever gone out on a dinner date or to dinner with some friends at a fancy restaurant, tried to order some wine, and ended up being downright embarrassed by not knowing a single thing about wine? Well from now on, don’t worry! You don’t have to be a vino expert to order a decent glass of wine. Of course, different flavors of wine may taste better with different foods, but in reality, everybody’s palates are different so everybody has different opinions about flavor and taste. Here are some tricks and tips you can use at restaurants to make yourself sound a bit more educated in the wine department:

5 of the Best Foods to Try in Chicago

Chicago is one of the most visited cities in America. Along with the city’s extreme popularity, there are also many foods and restaurants in Chicago that have become increasingly popular over time. Here are just five of the very many delicious foods in Chicago that are considered “must-try” foods within the city.

Catering: Is It Right For Your Restaurant?

Looking to expand, you may consider the far-reaching prospect of catering!

5 Halloween Marketing Tips for Your Restaurant

5 Tips for Ordering Wine at a Restaurant

If you’re not a wine expert and you don’t already have a favorite type of wine, ordering wine in a restaurant can be intimidating, stressful, and potentially embarrassing. Dining out and ordering wine with your meal should not be such a negative experience! Here are five steps to help you through the process of ordering the perfect wine at a restaurant:

All Blendtec machines look modern and have simple and universal operating controls. Some have easy to understand digital readouts. This is a product line for the 21st Century and that's why CKitchen.com is proud to present the line to you.

There are many variables that play into your bottom line. From unchanging costs like rent to fluctuating costs like utilities, restaurant owners and accountants have their hands full when navigating the financial pitfalls that can turn a profit into a sinkhole.

Starbucks, a leader in the coffee industry, has recently taken steps to bring coffee to your doorstep - literally! Their pilot program for coffee delivery was announced earlier this year, and now select businesses can order coffee through a dedicated website and have it delivered right to their office.

How to Avoid Cross-Contamination in Your Restaurant

On Wednesday, October 21, 2015, two lawsuits were filed against the owners of a San Jose Mexican restaurant, Mariscos San Juan #3, where the food made nearly 100 people ill, and left 24 people with confirmed cases of Shigella, a contagious diarrhoeal disease. As of Friday, October 23, 2015, the number of outbreak-associated cases of Shigella had increased to 141, and the number of confirmed cases had risen to 49.

Looking for an easy and unique salad to serve to your customers this fall season? Or a new and creative soup to offer as an appetizer? Two delicious side-dishes you’ll have to try out in your restaurant this fall season are Cream of Pumpkin Soup and Roasted Pumpkin, Arugula, and Dried Cherry Salad. Take a look at each of these easy, unique, and creative recipes below. You’ll surely want to add these to your recipe book to come back to in the future!

What’s in a name, you ask? Well, quite a bit, actually. In the business world, there is nothing more important than making an impact right off the bat, and what better way to do this than with your name and a little bit of humor? Like with a pun! We’ve all seen shops and restaurants with cheesy puns as names, right? And you’ve got to admit… they’re actually pretty catchy! Take a look at this list of ten various eateries sporting awfully punny names:

5 Tips for Ordering a Vegan Meal at Any Restaurant

Anyone with special dietary needs or desires knows that there is nothing more frustrating than going out to eat at a restaurant and not knowing what to order, or whether or not the food that you’re about to bite into is even safe for you. In a perfect world, all restaurants would have specialized menus to meet everyone’s specific needs, and nobody would never have to ask millions of questions about ingredients or how their food is being made.

April was a successful month, at least for three quarters of the restaurant industry. The  National Restaurant Association’s Restaurant Performance Index’s boost from these numbers shows a promising summertime start for restaurants nationwide, and many are feeling the morale increase as profits continue to steadily climb. An optimistic outlook for growth brings with it some new considerations for restaurants who may have been struggling in the past winter season.

Rice is a food that, in America at least, usually takes something of a backseat to whatever other foods it's paired with.

While the carnival may have you believing that the only sweet treats coming out of a fryer are deep-fried Oreos or Twinkies, deep frying doesn't always have to mean an unhealthy indulgence.

The Cuisine Range Can Cook Multiple Meals At A Time

Restaurants require several pieces of equipment in order to create their meals.

Many people across the United States want to eat healthier.

The Ultimate Guide to Eating in Restaurants with Children

Are you ready to start bringing your kids to restaurants with you? This doesn’t need to be stressful. You simply need to keep certain tips in mind. By remembering these points, you, your children, and everyone else at the restaurant is far more likely to have a pleasant experience.

Filtration is an essential part of water sourcing in any restaurant kitchen and can impact the quality and taste of beverages as well as the longevity and maintenance requirements for your equipment.

Food takes on a cultural aspect in certain parts of the United States.

Lunch spots typically have to cater to the demands of business professionals who want something quick to eat in between their meetings.

A slow cooker can improve efficiency at a restaurant

In some instances, it is more efficient for a restaurant to cook one batch of a staple product at the beginning of each day.

The head chef at any restaurant should consider adding panini's to a menu to take advantage of this popular meal.